Get started with a no-cost, over-the-phone consultation with a STAR Institute therapist by completing the Child Intake Form / Adult Intake Form or contact us at 303-221-7827.

For questions or additional information contact our Treatment Center at treatment@sensoryhealth.org or by calling us at 303-221-7827.

The symptoms of SPD vary greatly depending upon the sense that is affected, how that sense is affected, and the severity of the condition.

SPD may occur in each sensory system: Visual, Auditory, Tactile, Smell, Taste, Vestibular, Proprioception, Interoception AND symptoms may vary depending on subtype. That is why SPD is so difficult to understand and diagnose. The person may have 1, 2 or up to 8 sensory systems involved and 1, 2, or up to 6 different subtypes. 86 or > 260,000 different patterns of expression of SPD. Each person with SPD must be individually assessed and treatment never looks the same for different children!

People with SPD misinterpret everyday sensory information, such as touch, sound, and movement. They may feel bombarded by information, they may crave intense sensory experiences, or they may be unaware of sensations that others feel. They may also have sensory-motor symptoms such as a weak body, clumsiness or awkwardness or delayed motor skills.

If a person has SPD often the symptoms result in emotional, behavioral, social, attentional, or motoric problems. These secondary problems can take many forms and look different depending on the child and family context.

* Although SPD is described as one of the three primary patterns because a person can be affected in 1, 2, or 8 different systems it could actually be considered another 8 different subtypes, bringing the total number for subtypes to 13 (3 in SMD; 2 in SBMD; and 8 in SDD). 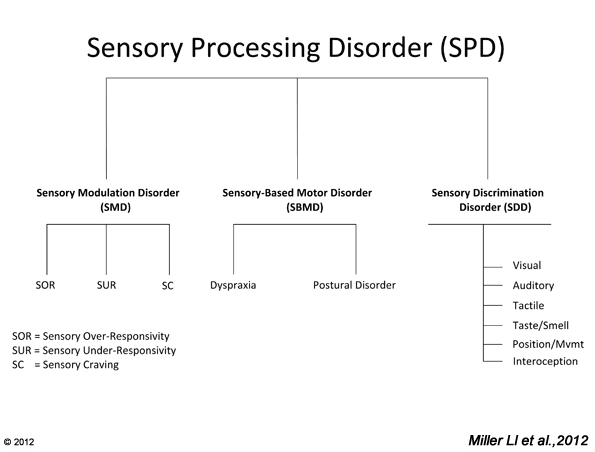 Individuals with sensory over-responsivity are more sensitive to sensory stimulation than most people. Their bodies feel sensation too easily or too intensely. They might feel as if they are being constantly bombarded with information. Consequently, these people often have a “fight or flight” response to sensation, e.g. being touched unexpectedly or loud noise, a condition sometimes called “sensory defensiveness.” They may try to avoid or minimize sensations, e.g. withdraw from being touched or cover their ears to avoid loud sounds.

Individuals who are under-responsive to sensory stimuli are often quiet and passive, disregarding or not responding to stimuli of the usual intensity available in their sensory environment. They may appear withdrawn, difficult to engage and or self-absorbed because they do not detect the sensory input in their environment. Their under-responsivity to tactile and deep pressure input may lead to poor body awareness, clumsiness or movements that are not graded appropriately. These children may not perceive objects that are too hot or cold or they may not notice pain in response to bumps, falls, cuts, or scrapes.

Individuals with this pattern actively seek or crave sensory stimulation and seem to have an almost insatiable desire for sensory input. They tend to be constantly moving, crashing, bumping, and/or jumping. They may “need” to touch everything and be overly affectionate, not understanding what is “their space” vs. “other’s space.” Sensory seekers are often thought to have Attention Deficit Hyperactivity Disorder (ADHD) or Attention Deficit Disorder (ADD).  A key factor with Sensory Craving is that when the individual receives more input it does not regulate him/her; in fact, those with true craving disorders become disorganized with additional stimulation.

An individual with postural disorder has difficulty stabilizing his/her body during movement or at rest in order to meet the demands of the environment or of a motor task. When postural control is good, the person can reach, push, pull, etc. and has good resistance against force. Individuals with poor postural control often do not have the body control to maintain a good standing or sitting position.

Individuals with Dyspraxia have trouble processing sensory information properly, resulting in problems planning and carrying out new motor actions. They may have difficulty in forming a goal or idea, planning a sequence of actions or performing new motor tasks. These individuals are clumsy, awkward, and accident-prone. They may break toys, have poor skill in ball activities or other sports, or have trouble with fine motor activities. They may prefer sedentary activities or try to hide their motor planning problem with verbalization or with fantasy play.

Sensory discrimination refers to the process whereby specific qualities of sensory stimuli are perceived and meaning attributed to them. Discriminate means understanding accurately what is seen, heard, felt, tasted, or smelled. Individuals with SDD difficulties have problems determining the characteristics of sensory stimuli. The result is a poor ability to interpret or give meaning to the specific qualities of stimuli or difficulty detecting similarities and differences among stimuli. (Do I see a “P” or a “Q”? Do I hear “cat” or “cap”? Do I feel a quarter or a dime in my pocket? Am I falling to the side or backwards?). Individuals with poor sensory discrimination may appear awkward in both gross and fine motor abilities and/or inattentive to people and objects in their environment. They may take extra time to process the important aspects of sensory stimuli.