Skip to main content
Be sure to check out our Fall Food and Cooking Clubs for Kids!
Close

My 9 Year Old Daughter's Sensory Meltdowns Are Not Tantrums 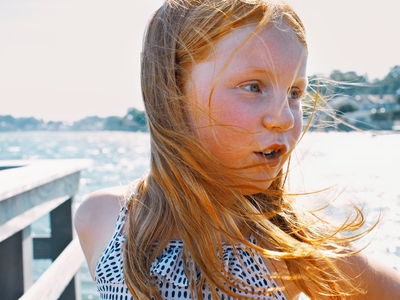 When I decided to write this blog post, I approached my husband with the topic of Sensory Processing Disorder (SPD) meltdowns, he turned to me and asked “Which one of the many that we have experienced over the years, are you going to use?”

I can recall so many examples of sensory meltdowns over the years, and none of them are pretty. An SPD meltdown is like no other meltdown.  I feel it needs explanation for people to completely understand what it’s like through the eyes of the child. A sensory meltdown is not a temper tantrum!!! It is an overload on the central nervous system. It can happen at any moment in time as the trigger is different for each individual child. Their daily environment is continually assaulting their central nervous system until eventually there will be an overload. The child in that moment has no control, telling them to calm down is an absolutely pointless strategy.

There is one SPD meltdown, which took place a little over a year ago that is so vivid in my mind. No, she was not five or six. She was nine and had already learned about what could trigger her to have an SPD meltdown.  She was involved in Cheerleading and as the weather grew colder, practices were moved inside. I drove her to the school thinking of loud gymnasiums and echoing voices. Her coaches were aware of her SPD and anxiety. I reminded her it would be loud, but she would be ok.  She assured me she was fine and I crossed my fingers.  As I dropped her off, I took one last look over my shoulder and could see the first visual sign of impending trouble: red cheeks.

I quickly ran my errands, but had a sinking feeling in the pit of my stomach. I returned to the school early and figured I would watch practice. I noticed I was walking down the school hallway at a very fast pace. As soon as I walked in I heard another parent say to the coach that I was here, but all I could see was my daughter.  I knew she was doing everything she could to try to stay calm, but I had to get her out of there, away from her squad and all the eyes staring at her. There was another 30 minutes left of practice and I had a feeling of panic for her. The coach explained to me that she was upset, but couldn’t tell her why. The entire time my eyes were locked on my daughter. Her cheeks were beet red and her eyes were filled with tears.  Her hands were clenched and she was lying on her stomach.  There were beads of sweat on her top lip. I calmly reminded her coach that the noise factor triggered her SPD and asked why she didn’t call me. Inside I was seething.  Here I was explaining my daughter’s SPD to a teacher, again. The coach announced she didn’t call because my daughter was ok. I looked and said, “No, she is not”, and called my child off the floor.

At this point, her entire body relaxed and the tears flowed from her eyes as we stood in the hall. She could not even speak. I stood there telling her to breathe. After five minutes, she squeezed my hand and  said she would try to go back in. I let her know I wouldn’t leave. As we walked back in the sound of the cheering hit me and she shivered. It was just the last thing she had to get through after holding it together all day in school. I now understood what pushed her over. As she stood there, her nose was twitching and I could see the panic in her face as she covered her ears with her hands.  Instead of trying to quiet the situation for her, the coaches allowed the squad to engage in some extremely noisy song and games to end the practice, even after my explanation.

I went down to the gym floor and said I was taking her home since they were done practicing.  My daughter looked at me panicked and with desperation in her voice she said “I don’t want to lose it in front of everyone”.  We raced down the hallway and into the car. The door barely slammed before she was screaming and crying. She was in the car, experiencing a full sensory meltdown that lasted for a good 15-20 minutes.  I sat in the parking lot and waited for her to be in control. I said nothing. I was not mad or upset with her in the slightest.  Although, I know I cannot be with her all the time now that she is getting older. I was furious with her coaches for not calling me to come back and I was mad at myself for not staying. We drove home in silence and halfway home she announced she wanted to quit cheerleading.  I took a very deep breath and said she had made a commitment to her squad and she could not quit right before Cheerfest. We did attend the remainder of practices with earplugs in our ears and a parent there to offer support. Needless to say, she is not in cheerleading this year and we have moved on to other activities such as yoga and piano lessons, where noise is less of a factor.

SPD and meltdowns go hand in hand. As your children get older and learn about their own internal feelings they will have more of these moments out of the public eye.  When the meltdown happens (and it will) they will need us there to explain to the world once again that they are not upset or throwing a temper tantrum. It is just that one moment when the child can no longer deal with all the sensory information that their central nervous system is being supplied.  SPD and meltdowns have a special bond so keep on looking for signs of an impending meltdown.

Kim Jacobs lives in the state of New York with her husband of 21 years and currently works in an urban school district.  She has a wonderful family of three children, two girls and a boy.  Their ages are 15, 10, and 7 respectively.  She is a teacher that has worked with toddlers to fifth graders in her twenty year education career.  Over the years, she has developed a passion for advocating for children with Sensory Processing Disorder (SPD) and anxiety due to the diagnosis of her daughter. At the age of two, her daughter was diagnosed with SPD followed by a diagnosis of anxiety at the age of nine years old.

We want to hear your story.

Submit your blog article to marketing@spdstar.org to become a STAR Institute blog contributor.